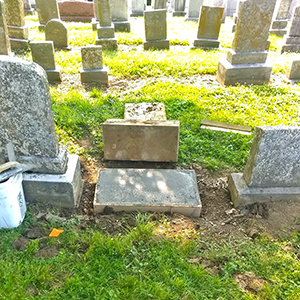 All of nature is springing back to life in every shade of green, pink, white and yellow, so it may be a stretch to grasp that this is also the beginning of monument repair season for Jewish Cemeteries of Greater Cincinnati. And twelve years into the existence of this area’s unique, unified Jewish cemetery organization, one thing is quite clear: Repairing the ravages of nearly two centuries on hundreds of very old monuments and markers in 25 cemeteries alone could keep JCGC’s staff busy all year, without performing a single burial or performing other maintenance.

“Ideally we would have a dedicated fund for monument repair work and be able to hire dedicated staff to do the work,” says David Harris, Executive Director of Jewish Cemeteries. Reality is that repairs, which are highly dependent on weather, are extremely difficult to get done with the organization’s small staff. For them, Job One is performing burials, with very little notice, yet with maximum dignity for the deceased, their family and the community. Repairs and all other property and landscape maintenance must stop when burials are scheduled. For Harris and all the staff and board, it’s frustrating when they care so much about doing their job well, and know this is an area that needs more attention.

This Mission Statement goes to the heart of the organization’s work: JCGC serves the burial needs of the Greater Cincinnati Jewish community with care and dignity and honors the resting places of our people. Yet financial sustainability must drive and discipline all work, as well. Since Jewish Cemeteries began operations in 2018, annual budgeting has only been able to earmark enough to repair about 25 markers per year. This number represents only repairs whose cost JCGC must bear, instead of those costs being covered by the gravestone’s owner, which is always the family of the deceased.

JCGC’s office reaches out to and must rely on known surviving family to file an insurance claim and reimburse JCGC for repair costs. The rub comes when there is no known surviving family. That’s the really vast cost which Jewish Cemeteries’ budget must try to cover. Harris explains, “When JCGC came together twelve years ago, we pledged to care for many cemeteries that were very old, some of which were part of congregations that are long gone. For many of the graves, there just is no remaining family that JCGC can contact to recover repair costs. Some of the oldest cemeteries are on hillsides whose soil layers slip year after year. But we are charged with the obligation to do the work, out of respect for our mission.”

“It often surprises people to learn that the monument they or their loved one purchased is their own responsibility for upkeep and repair,” Harris points out. Mowing, trimming and landscaping are included in a gravesite purchase as “perpetual care,” but monuments are not covered. “People are also surprised to hear that this repair expense, even for vandalism, is usually covered by homeowner’s policies.” For this reason, it’s a good idea to check one’s policy language to verify whether specific “funerary objects” such as headstones, commemorative benches, mausoleums, etc. are “attached” on one’s own coverage, and exactly which family members’ markers are covered. A simple foundation repair can run between $150 and $350 dollars, but other damages to expensive memorials can be far more costly.

There are a few typical types of repair work required. A monument’s foundation has sunk or tilted, eroded or slid downhill and must be removed and replaced. Water has seeped into the space between the base and the tablet, due to the silicone seal having deteriorated over time, and then the water has frozen and expanded enough times to cause the tablet to literally slide right off of the base such that it must be reset and resealed. Or deer or a strong wind may actually have toppled a monument, which must be reset. Harris explains, “Sometimes it’s a family member who reports need for repair, but often our staff sees the need first.” Anyone who sees a monument that has fallen over should contact the JCGC office at 513-961-0178.

As often as possible the work is done by JCGC’s full-time staff under the direction of foreman Ronnie King. When that isn’t possible, the company with which Jewish Cemeteries allies for monument work, Stonecraft, does the job and bills JCGC. First, the actual headstone or monument is carefully laid down (if it hasn’t fallen) and its foundation assessed for either repair or replacement. If the latter is called for, and the weather and burials permit, the old foundation is removed using a backhoe—unless the repair’s vicinity is too crowded with other monuments or trees. In that case the job calls for human fortitude and old-fashioned pick axes and sledgehammers. The new foundation is then framed up and the concrete poured (weather permitting) and allowed to cure for sufficient days. Finally, the headstone is repositioned and sealed on with epoxy. Best case scenario: A single repair requires two to three trips to the job site, with all required staff and equipment. 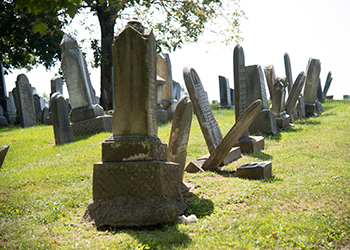 Harris knows a more efficient approach would be less piecemeal. “We’d rather be addressing these issues proactively, cemetery by cemetery, to preserve these memorials, some of which are historic, but regardless, they all deserve respectful care.” Several years back, while beginning to plan for their new Loveland Cemetery to prepare for the future, Jewish Cemeteries stated its goal of developing and executing a plan to make repairs in its existing cemeteries. In pursuit of this, Harris says, “Last year we began an inventory of all the graves in all our cemeteries, noting exactly which ones needed what kind of work—a massive job. This inventory will also include a list of monuments in need of cleaning from lichens, mosses, and mold, which can wear down inscriptions and create cleavage points in the stone, eventually causing cracks.”

Cleaning the monuments, done with a pressure washer or a brush and cleaning solution for the more delicate stones, is a service that Jewish Cemeteries provides to families for a small fee. That work is too labor intensive – and the number of memorials needing cleaning too large – for their staff to clean stones for which no fee can be assessed.

The repair inventory will continue this summer, hopefully with intern help if possible. After the inventory, methodical monument repair can begin if the budget allows. That’s a big ‘if’, at this point. “We are doing this work regardless, but we’re underfunded to really tackle the magnitude of the problem,” Harris says. Jewish Cemeteries is working on identifying grant opportunities, which could help offset the cost of the work. However, grants for preservation will likely only cover those historic and artistically significant monuments that require specialized work from qualified companies. This is the type of work that must be done at the 200-year-old Chestnut Street Cemetery, for example.

Harris sums up, “It’s imperative that we do the work, if we want to preserve these monuments and prevent further damage to all of these historic cemeteries.” Since grants are still being pursued, and many require matching funds, Harris concludes that, “This calls for us to humbly ask the community to step up to help with these costs. Especially given that there are no known family members to contact in many cases, it is really the whole community’s responsibility to ensure that our ancestors are properly honored.”

If you would like to learn more or would like to contribute to this effort, Jewish Cemeteries would sincerely appreciate donations to its general fund, which can be used for general monument repair, beyond what its endowment can support annually.

The life stories of many of those buried in Cincinnati’s Jewish cemeteries are lost to history, but they are still bound up in the complex bonds of Jewish communal continuity. And even as the traces of our ancestors here have faded, Mother Nature has had an almost two century head start on grinding down the many thousands of grave markers in the 25 Jewish cemeteries in the Cincinnati region. Jewish Cemeteries of Greater Cincinnati hopes the present community will step up to help them fulfill their mission, “…to honor the resting places of our people.”