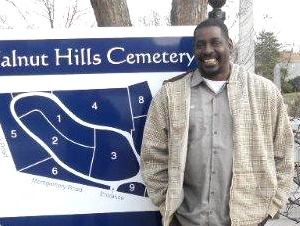 Ronnie King is a highly valued member of the JCGC team. Ronnie came to work at United Jewish Cemeteries (UJC) in 1999, and when JCGC merged with UJC and many other Jewish cemeteries in 2008, Ronnie became JCGC’s foreman. Since JCGC’s formation, Ronnie and his crew have done all of the funeral/burial services and grounds keeping work at the former UJC cemeteries in Walnut Hills, Clifton, Montgomery, Price Hill and Hamilton, as well as at the Adath Israel – Price Hill cemetery. This year JCGC is eliminating outside contractors except for grass cutting and bringing all funeral/burial services and grounds keeping work in house. As a result, Ronnie and his crew are assuming responsibility for all these functions at the other Price Hill cemeteries, as well as at the Covedale cemeteries.

JCGC’s Executive Director, David Hoguet, is one of Ronnie’s biggest fans. Commenting on Ronnie’s work habits, David said: “Ronnie treats our cemeteries the same way he would treat his own property. He knows every inch of the grounds and he really cares about keeping them looking nice. When it comes to funerals, I get a lot of positive feedback from the rabbis about how he and his crew conduct themselves and the care they show to the families of the deceased.”

Ronnie and his wife, Annie, have eight children and they enjoy fishing, cooking and quiet evenings at home with their grandchildren.