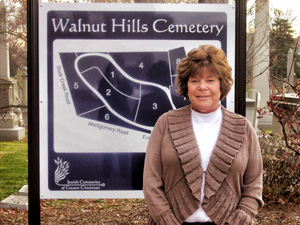 When you call the JCGC office, which is located at the historic Walnut Hills Cemetery, you will usually find that the friendly voice at the other end of the phone belongs to Mary Bauer. Mary came to work for United Jewish Cemeteries in 2005, and when JCGC merged with UJC and many other Jewish cemeteries in 2008, Mary became JCGC’s Office Manager.

At JCGC, Mary has a diverse array of duties, including bookkeeping, monument sales, and genealogy searches. Mary has led the organization through two computer conversions, first when, in anticipation of the merger, UJC adopted the Repose system as its new software system and, later, when she had to input data into the new system for all the other cemeteries that joined JCGC. Due largely to Mary’s efforts, as well as some dedicated interns and volunteers, JCGC has photographs of almost all the monuments in its cemeteries in the system, and they can be viewed by clicking on the Genealogy tab on the JCGC website.

Mary enjoys helping all the people that call or visit JCGC, whether they have a genealogy question or need directions to one of the cemeteries. Prior to JCGC, Mary had spent over 30 years in the banking world, with her last assignment at Provident Bank. Mary has four adult children and lives on the west side.