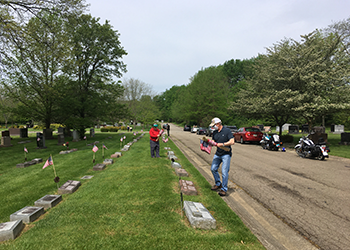 U.S. Veteran medallions that now proudly mark the graves of every veteran in two of Cincinnati’s largest Jewish cemeteries, Montgomery’s United Jewish Cemetery and the Walnut Hills Cemetery, were further transformed on Sunday, May 17 with the addition of over 1000 new American flags.

Dayton Scout Ethan Zied teamed up with Jewish Cemeteries of Greater Cincinnati over the past two years to do this unprecedented work which has resulted in his attaining Eagle Scout status, as well as won for him the top Eagle project award from the Dan Beard Council this year. His research and fundraising, with his father’s help and several local donations, felt like they came full circle on that May day in Jewish American Heritage Month 2020. 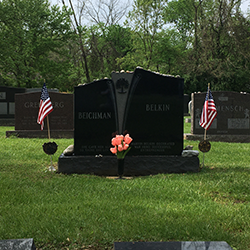 Volunteers from the Valley Temple Men’s Club as well as two local families with children, the Jaffees and Gildenblatts/Nadels, did the footwork of placing the flags in two sessions at the two locations that day. Face masks, social distancing and hand sanitizer did not dampen the gathering in the cemeteries Sunday, welcome after so many weeks of isolation. The meditative work of honoring our ancestors’ patriotic sacrifices felt like some small consolation for recent losses in our community, made utterly real by new graves here and there among the monuments and trees.

Over 2500 Jewish veterans have been identified as buried on properties now under the management of Jewish Cemeteries of Greater Cincinnati, or JCGC, and another thousand have been buried in cemeteries elsewhere. When Ethan Zied asked to delve into the vast merged records of the organization, he found himself deep in local history. Weil-Kahn Funeral Home’s excellent records came into play as well, and they both rounded out and validated those of Jewish Cemeteries. Data wrangling and much in-person searching on site have now produced two wonderfully changed cemeteries for all of Cincinnati to treasure. 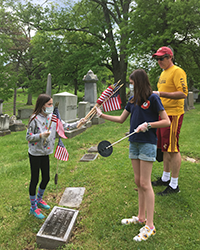 “Some still don’t know that Cincinnati’s Jewish community, like Jews across America, have responded to the call to patriotism over our history in numbers outpacing their percentage representation in our population. Many family gravesites were marked with two, three or more medallions or flags by the end of the day,” said Jewish Cemeteries Executive Director David Harris. “The markers and flags now really help you see it.”

Further info about the project can be found on the JCGC website and on the Facebook page, @JewishCemeteriesCincy. There readers will find a link as well to donate to Ethan’s GoFundMe campaign, dedicated to marking veterans’ graves in the 23 remaining Jewish cemeteries in Cincinnati