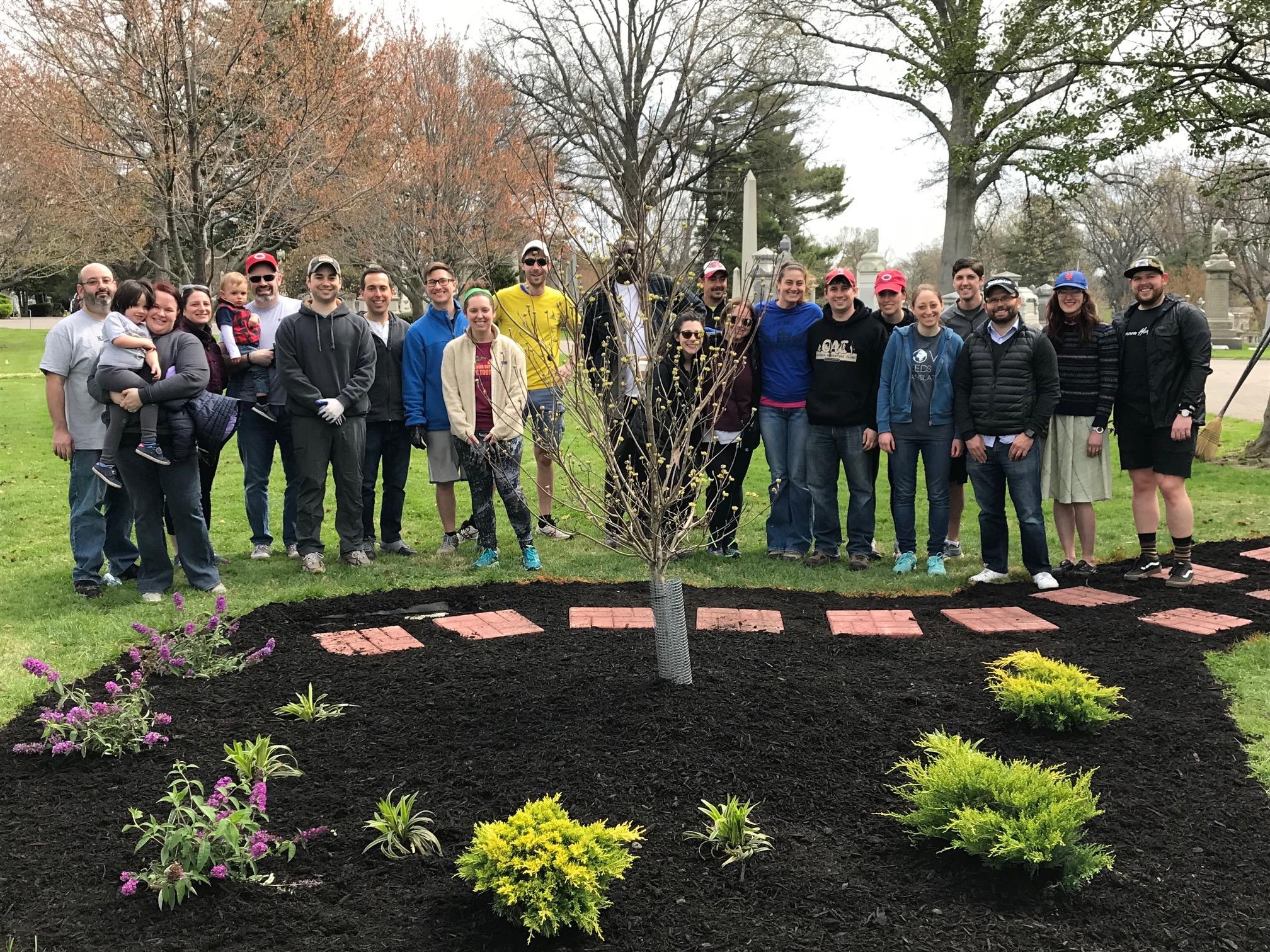 At its best, community leadership moves in a spiraling upward path, with today’s leaders climbing on the work of leaders of the past. Just as critical to progress, however, is that tomorrow’s leaders step up and learn from today’s.

On April 22, 2018, Earth Day, eighteen future Cincinnati Jewish community leaders built on the resources of JCGC and the Jewish Federation of Cincinnati to create a beautiful and dignified memorial garden. As leaders do, they brought to reality an idea—in this case, to honor the memory of Bill Riegel, past long-time superintendent of JCGC’s precursor, United Jewish Cemeteries.

The energetic young adults were 2017-18 participants in and past alumni of the LEAD program (Lead, Educate, Act and Develop), conducted annually by Jewish Federation of Cincinnati’s Young Adult Division (YAD). Volunteering as a group was their culminating event of a year spent exploring the whole range of agencies and projects that sustain and elevate local Jewish community life.

The bonds of friendship the group had developed in the process were evident in the morning’s easy conversation and laughter. YAD development officer Jaynie Levinson, who arranged with JCGC Executive Director David Harris for the day’s project, explains, “The LEAD program is meant to foster and develop future leaders in our Jewish Community. We meet once a month, we learn from Jewish professionals, we learn from each other—but this was the opportunity to take our first step in leadership and give back to our community. The morning was rewarding and fun, which is the best part about the LEAD program, and the future of Jewish engagement!”

JCGC’s Walnut Hills Cemetery was the very lucky recipient for the group’s impressive energy and capacity to learn new skills. JCGC foreman Ronnie King and assistant foreman Tim O’Connel had the garden site prepped and all materials ready, but even so, they too were impressed by the outcome of just two hours of work by 36 strong hands!

Under Tim’s direction and Ronnie’s supervision, LEAD crews quickly got the weed barrier laid down, pavers positioned and plant locations decided. Slightly anxious first-time gardeners next got hands-on practice digging holes and planting butterfly bushes, junipers, and monkey grasses. Meanwhile, shovelers tackled a truckful of mulch, repeatedly filling the wheelbarrow for the team of mulch spreaders. Rakers removed loads of prickly pods dropped by a massive sweetgum tree over the site. Curious LEAD class toddlers investigated worms, “helped,” and delighted everyone. Cleanup ended with one excited LEADer donning the power blower, calling it his Ghostbusters Proton Pack. (These are young leaders, after all!). Everyone stood back and admired their work before the final proud group photo.

JCGC board members Larry Neuman, Josh Juran (a LEAD graduate), and Karen Zanger were on hand all morning, speaking first with the group over warmup coffee and bagels about Bill Riegel, whose memory they would honor, and about JCGC’s communal role. If the cadre of future leaders were pleased with their morning’s work, JCGC got at least as much satisfaction in return, working alongside the focused energies of these young adults pitching in for their community. The garden will be dedicated in a community ceremony this fall, which will include a tour of the Walnut Hills Cemetery.

JCGC welcomes the help of individuals and groups throughout the year. Volunteer arrangements can be made by contacting David Harris at 513-961-0178 or dharris@jcemcin.org. 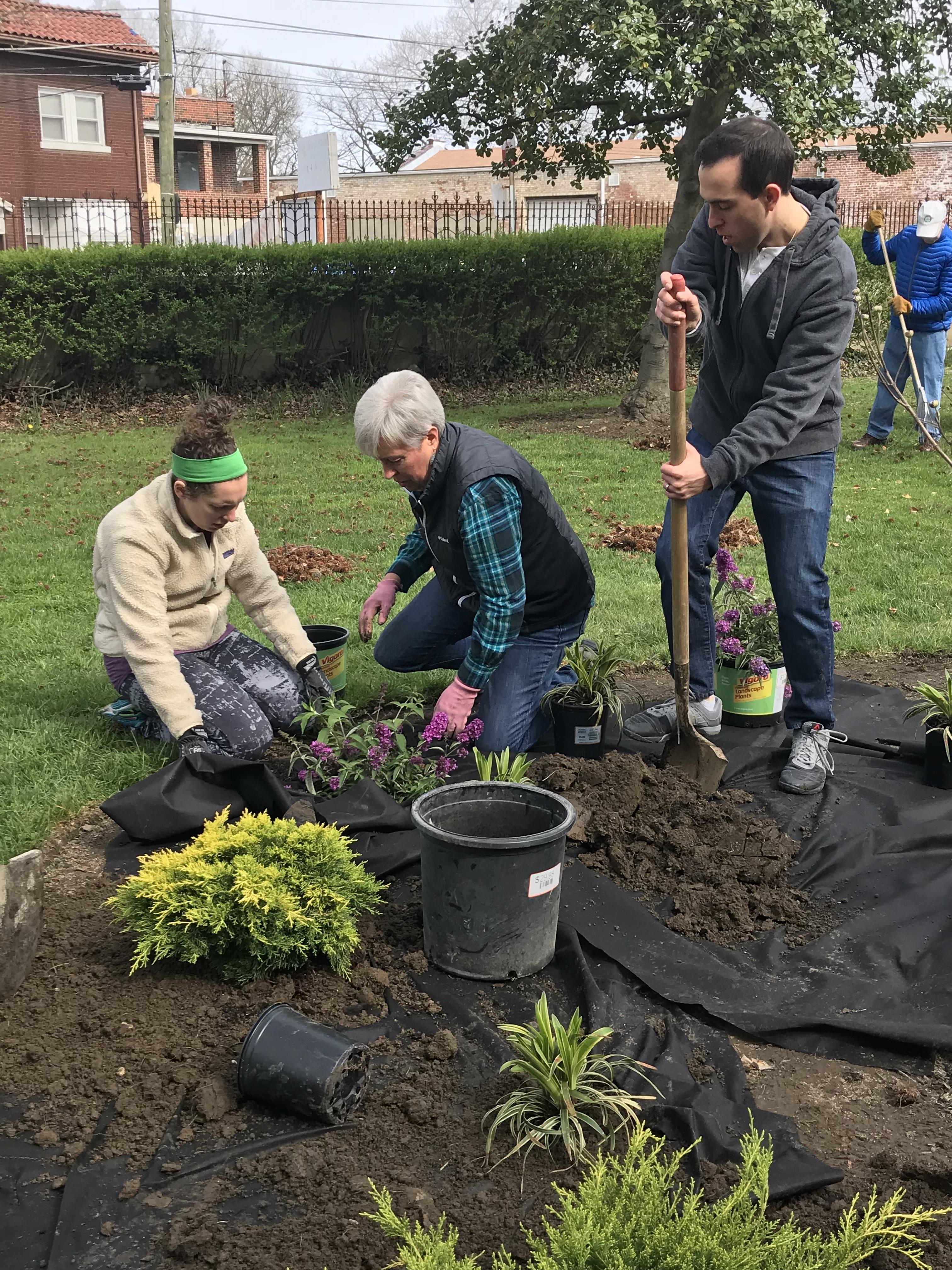