In 1928, the Vigransky Family funded the construction of a chapel for the Kneseth Israel Cemetery, at the corner of Anderson Ferry and Sidney Road. The family later dropped the “sky” from the name and Vigran family members are still active members of our Cincinnati Jewish community.

This autumn, JCGC had to remove the chapel building, as the years had taken a toll on the structure. JCGC will be rehabilitating the site where the chapel stood and will rededicate the site this coming year. Part of that ceremony will be to reveal the contents of a time-capsule that was placed in the cornerstone for the chapel and which JCGC recovered during demolition!

We asked the Vigran family if they might have a photograph of the building when it stood in its glory, which we could use to create a rendering of the building for the rededication. The family did better than providing a photograph: The chapel was dedicated in a ceremony in 1929 and was filmed! This would have been an early use of a movie camera for a private ceremony and was very forward-thinking for the time. One descendent had this short, silent film transferred to VHS tape at some point and we have now digitized the film.

You can view the film here.

If you can identify any of the individuals in the film, please let us know by calling 513-961-0178 or emailing info@jcemcin.org. 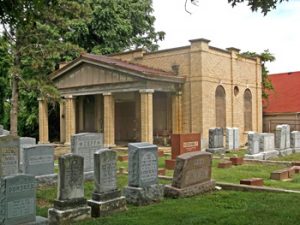 JCGC is preparing a celebration of our community in 2021, commemorating 200-years of Jewish communal life in Cincinnati, since the founding of the Chestnut Street Cemetery in 1821. As JCGC works to preserve our cemeteries and the community history they hold, we hope that some of you might have images or documents that pertain to other Cincinnati Jewish cemeteries or the buildings that used to exist at several of the cemeteries. If you have any photographs or documents to share, you may do so by emailing or calling the number above to set up a time for us to meet. All items will be scanned and returned, if desired.

Stay tuned for announcements about the rededication of the Kneseth Israel Cemetery!