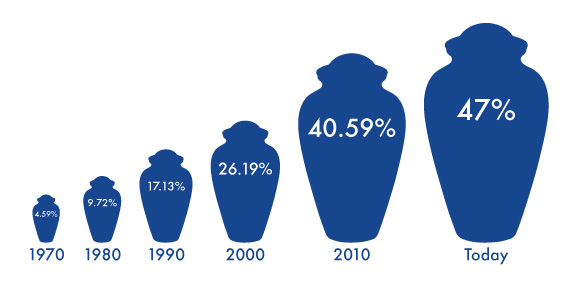 Cremation is a growing trend in the United States, as well as the broader world population. Cremation rates in Western Europe range from 35% in France to 88% in Switzerland. Canada is at 67%, Great Britain at 75% and Japan is over 99%. The United States, at 47%, is still below, but rapidly approaching, 50%. To give you an idea in the growth of this practice, in 1958 the cremation rate in the U.S. was 4%.

How has this growth in cremation affected the Jewish community, and in particular, how has it affected Cincinnati?

Orthodox and Conservative Judaism strongly oppose cremation and do not allow the burial of cremains in their cemeteries. Reform Judaism does not oppose cremation as vehemently as it once did. Reform rabbis generally believe that cremation is contrary to Jewish tradition, but that there is no clear cut prohibition in the halachic literature. Reform cemeteries allow the burial of cremains.

Despite these strong views either prohibiting or discouraging the use of cremation, there is evidence that it is growing amongst Jews in the United States. In Cincinnati, however, there is less evidence of growth.

There are no hard numbers on cremation amongst Jews in the United States. An article in the Forward in June 2012 stated that the numbers are still small, but Jewish funeral directors agree that the trend is up. It also varies widely based on geography, with the west coast having higher rates. Several of the funeral directors interviewed for the article stated that Jews not affiliated with a congregation are choosing cremation at a higher rate, and that independent Jewish cemeteries with no synagogue affiliation tend to see more cremations (and in some cases may be promoting them). The author of the article concluded that while cremation rates varied from city to city, they generally did not top 15%.

Cincinnati’s trends are similar to the national cremation Jewish trends in that the cremation rates are about 13% (range of 9 – 15%) over the most recent fifteen-year period, as measured by Weil Funeral Home statistics. When measured by JCGC statistics, which only include cremation burials in our cemeteries, the rate is about 7% (range of 5 – 12%) over the most recent eight-year period. Where Cincinnati differs from the national statistics is that our cremation rates, while they vary somewhat from year to year, do not show any kind of significant upward trend. So the only conclusion that can be drawn is that Cincinnati was probably ahead of the trend within the last ten years, but that is no longer the case. One could speculate that, because of the strong historical Reform presence, the practice of cremation had an earlier introduction to the Jewish community here.