Carol and Larry Neuman Honored by JCGC at Voices of Giving 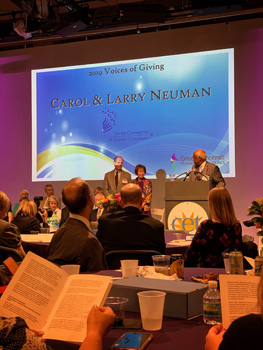 Among the many inspiring individuals honored at this year’s Voices of Giving event were Carol and Larry Neuman. The annual event of the Greater Cincinnati Planned Giving Council honors legacy donors to organizations throughout Greater Cincinnati and was held at CET on June 12th.

Larry is currently the Treasurer and Finance Committee Chair of JCGC, which supervises its endowment fund. He is the organization’s incoming President of the Board of Trustees. Larry is also Chair of JCGC’s Create Your Jewish Legacy planned giving campaign and serves on the Jewish Federation of Cincinnati’s Create Your Jewish Legacy Steering Committee.

Carol taught for 20 years at the Yavneh/Rockwern Academy, combining her talent for teaching and her passion for passing on Jewish heritage, values and traditions to her students. Larry had earlier served as President of the day school, was a member of its executive committee for 5 years, and co-chair of its endowment fund for over 20 years.

Carol and Larry made their first legacy gift commitment to JCGC in 2010. When JCGC launched a second planned giving campaign in 2014 as part of the Create Your Jewish Legacy program, they made a second gift commitment, to ensure that they were leading the way, inspiring others. With their gift, JCGC can continue to honor our forebearers with respect, provide burial services, including those for indigents, and preserve and honor our religious traditions and heritage. 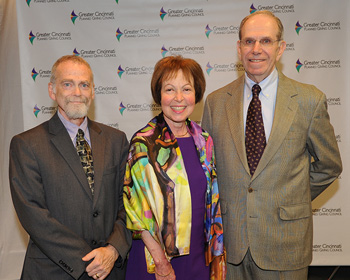 The Neumans have volunteered extensively at their congregation, Adath Israel, from chairing Mitzvah Day, to Board positions and leadership in the congregation’s Brotherhood and Sisterhood. Carol is a Lifetime Member of Hadassah and served on the Jewish National Fund Board for 20 years, excelling at and receiving recognition for her successful solicitations. She is also an active member of Women’s Interfaith Network of Cincinnati Suburbs (WINCS), and of Delta Psi, a teacher’s honorary society.

Both have been involved in the Jewish Home of Cincinnati. Carol served on the golf committee, its major fund raiser. Larry was on its board for 8 years, and for 6 years was Treasurer, a member of the Executive Committee, and chair of its Finance Committee and Endowment Committee.

Carol and Larry have been involved with The Center for Respite Care for 8 years, being co-chairs for 3 years of its major fund raiser. For the last seven years, Larry has been Secretary and a member of its Executive Committee. Carol organizes people to prepare meals and have lunch with the Center’s clients on July 4 and December 24 each year.

In both a volunteer capacity and as a professional advisor, Larry has solicited and helped secure dozens of planned gifts for the Jewish community and Greater Cincinnati community. He is one of the exemplary advisors who actively works to make sure that his clients consider and are then able to fulfill their charitable wishes.

JCGC was honored to be able to nominate Carol and Larry Neuman for their generous legacy gift commitments and also to acknowledge Larry as a professional advisor who has helped promote and bring to fruition other community members’ generosity.