Thousands of Jewish military veterans are buried in Cincinnati and they are collectively honored by three impressive memorials in Montgomery, Walnut Hills and the B’nai B’rith Judge Robert S. Kraft Veteran memorial in the Covedale cemeteries. Yet it took the initiative of Springboro Eagle Scout candidate Ethan Zied to begin the task of placing a marker at the grave of each and every Cincinnati Jewish veteran buried in JCGC cemeteries. Thanks to Ethan, that full roll call has now begun.

Completion is targeted for no later than 2021, but this idea took shape back in 2015, when Ethan desired to place a Memorial Day flag at his own grandfather’s grave in the UJC-Montgomery Cemetery. Howard Mason, Ethan’s mother’s father and a Vietnam War veteran, had died and been buried there a few months earlier. When Ethan asked to decorate more Jewish veterans’ graves at the same time, he learned that no comprehensive database of Cincinnati Jewish veterans existed.

Ethan decided to create such a database as his Eagle Scout service project. He had been placing flags on graves on Memorial Day since his Cub Scout days in the cemeteries around Dayton and Springboro. His new goal was to find Cincinnati’s deceased Jewish veterans so that they can easily be honored for their service.

The work called for long collaboration with JCGC office staff in searching the myriad unique, antique and sometimes incomplete burial records collected from the over 20 cemeteries that joined to form JCGC in 2008, plus all burials since then. This effort yielded a list of 800 U.S. veterans known to be buried in JCGC cemeteries. 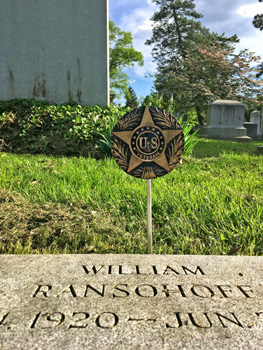 However, Weil Funeral Home had also been recording veteran burials since 1942, and a review of their data by Ethan and his team of volunteers identified well over 3,000 Cincinnati Jewish veterans who had died—not all of whom, however, were buried in JCGC cemeteries. So, hours of painstaking data comparison began, as Ethan and volunteers verified information across the two data bases. Many notations have been made in order to update JCGC records with additional veteran information from Weil’s. Bit by bit, veterans are also being discovered who served well before WWII, such as in the Civil War, the Spanish-American War and WWI. The task was, and still is, detailed and time-consuming.

And there remained the issue of covering the cost of the actual markers. This spring, three anonymous donors graciously responded to a first request from JCGC Executive Director David Harris for help purchasing an initial supply of veteran grave markers and flag holders. These lead gifts will need to be supplemented with additional fundraising. Many more grave markers will be needed before project’s end, and JCGC will need additional funds to help properly maintain the memorials in the cemeteries and otherwise honor veterans.

Just before Memorial Day 2019, four years after he decided on doing this project and following a year of planning, research, and then compiling the data, Ethan was ready to call together volunteers and begin placing the first markers on some known veterans’ graves at Walnut Hills Cemetery. 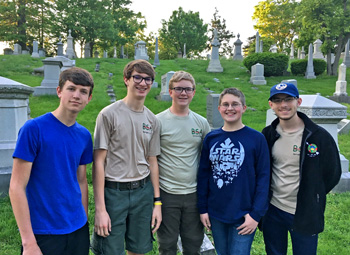 That crew consisted of three JCGC board members, several of Ethan’s friends from Springboro BSA Troop 7, and Ethan’s troop leaders. Together they placed markers on 250 veterans’ graves which they located on the grounds one…by…one. Literally hundreds more graves remain to be marked at other JCGC cemeteries, work that will be done by volunteers over the next three years. In total, it now seems likely that as many as 2,000 Jewish veterans are buried in JCGC cemeteries! 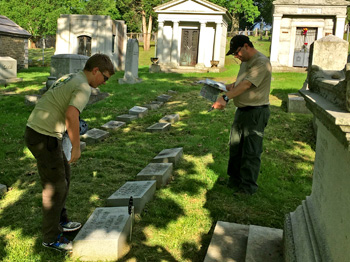 Ethan never talked with his grandfather, Howard Mason, about his experience in Vietnam. He has come to understand and respect the soldier’s life only through shows and movies he has experienced with his dad. When Ethan sees a veteran’s grave, “it reminds me who was there defending my country. War sucks, because it requires people defending our lives to do immoral acts, things we wouldn’t want to do. And people who give their lives maybe won’t even see the results of their sacrifice.” Knowing these things drives Ethan to want to decorate veterans’ graves all around his home region, especially the graves of Jews like his grandfather who were patriotic enough to provide national military service. For Ethan, this project is at the core of his patriotic identity.

Harris invites the whole community to play a role in this effort, which will subtly transform our cemeteries. Donors can help defray the cost of U.S. Veteran markers, which double as flag holders. Donations will be earmarked specifically for Ethan’s project and upkeep of JCGC Veterans Memorials. In addition, volunteers will be needed for work-days of various types, from helping with updating records to marking graves. Donation can be made here.

Community input is most important in another way as well. Since some of the records from JCGC’s database and Weil’s may be incomplete, families of veterans are encouraged to contact JCGC to be sure their loved ones are included.

“JCGC is incredibly grateful to our donors helping with this effort and to Ethan for his initiative, of course! It fills me with pride to know that JCGC is ensuring special recognition for these patriotic members of our community,” Harris said. “It was wonderful to spend time with Ethan and his troop, teaching them about Jewish cemeteries, and watching their eyes as they read the veterans’ markers, noting perhaps the battle in which they perished. We have every reason to be proud of our veterans’ service, and Ethan and his troop’s service, as well.”