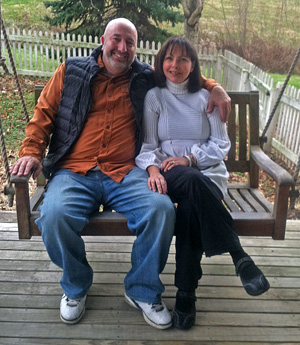 Bill Kahn doubles as Bob Weil’s partner at Weil Funeral Home and he is also an important member of the JCGC team. Bill has been JCGC’s cemetery lot and pre-need arrangements sales representative since its inception and previously performed these functions for United Jewish Cemeteries.

This summer, Bill and his wife, Nancy, expanded their ties with JCGC. They moved in to the house on the new cemetery property on Loveland – Miamiville Rd. and have been busy painting and remodeling. They are excited about their new home. The original part of the house was built in the early 1800’s and it has been expanded a number of times since then. It sits in the back of the property next to a pond.

Bill had an opportunity to visit the property when JCGC was doing its due diligence. The family that sold the property to JCGC had asked to stay in the house until this summer so their daughter would not have to move until she completed high school. During this time, Bill and Nancy had more opportunities to visit, and fell in love with the house. JCGC and the Kahns quickly reached an agreement enabling the Kahns to make the house their new home.

Bill will continue to perform the same sales functions for all JCGC’s cemeteries, including the new cemetery when it opens. JCGC is very pleased to have the Kahns living in the house and looking after the property.

JCGC expects to start developing the new cemetery in the next two to three years. This year we finalized a development plan. The Ritual Coordination Committee, composed of congregational rabbis, met and agreed on a plan to divide the new cemetery into Orthodox, Conservative, and Reform sections. We will follow this plan when construction of the roads begins in the next couple of years.